Searching through the Canadian terrestrial mollusc literature one notices that two (or three) species of Helicodiscus (family Helicodiscidae) have been recorded from Canada. For many years Helicodiscus parallelus (Say, 1817) was the only species known from the northeastern limits of the genus’ distribution in North America and was reported from Newfoundland, Nova Scotia, Prince Edward Island, Quebec and Ontario by Pilsbry (1948). Helicodiscus parallelus was considered the common, widespread northern species. However, in 1962 Hubricht revised the group, proposing several new species, including H. shimeki. Perhaps because it was named too late for inclusion in Aurèle La Rocque’s “Catalogue of the Recent Mollusca of Canada” (1953), H. shimeki was overlooked by some more recent authors. 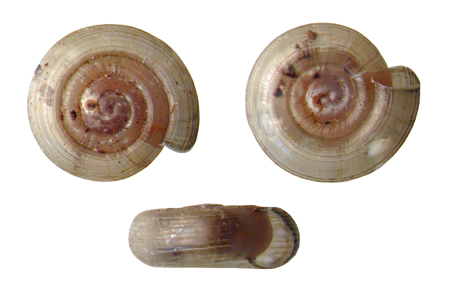 While the distinctions between species are subtle, to say the least, Hubricht’s taxonomy has generally been accepted. On H. shimeki Hubricht (1962: 103) wrote:

Helicodiscus shimeki is a species of the northern United States and probably southern Canada, although the author has seen no specimens from there . . . .

[It] may be readily distinguished from H. parallelus (Say) by its more slender whorls and its broader, shallower umbilicus.

Whether the relative breadth of the umbilicus and steepness of the umbilical walls are sufficient to separate species, I’m not sure, but it does appear that most (perhaps all) Canadian examples of Helicodiscus that I’ve seen (now from Nova Scotia, Ontario and Quebec) fit Hubricht’s concept of H. shimeki.

This is all very fine, but it leaves me wondering if any of the Canadian records purported to be Helicodiscus parallelus are that species.

The possible third species . . . Wayne Grimm (1996) in his list of Mixedwood Plains terrestrial Mollusca included “Helicodiscus notius”, another of Hubricht’s 1962 species (he also recognized H. shimeki and H. parallelus) one the basis of “. . . one alvar site in the Smiths Falls Plain, where it is microsympatric with H. parallelus and H. shimeki . . .” However, this record, like many in that report lacks details to verify the identification.

UPDATE: 25 May 2013 — Based on material that I saw in the Canadian Museum of Nature in September 2012, Helicodiscus parallelus does, indeed, also occur in Canada in addition to H. shimekii. I found H. parallelus in the collection from Ontario and at least southwest Quebec.— RF