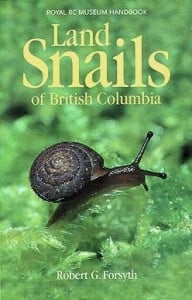 Land Snails of British Columbia, published in 2004 by the Royal BC Museum, includes full descriptions and illustrations for 88 species of terrestrial snails and slugs that live in the province, with the ambersnails (family Succineidae—see the checklist) listed. Each full species description include information on natural history and distribution inside and outside of British Columbia. Keys to genera, and when necessary, to species, are included. A comprehensive glossary of terms, and an extensive bibliography fills out the book. A colour section that consists of 8 pages highlights living animals in their natural habitat. The Introduction briefly introduces the reader to reproduction, life history, diet, locomotion, shell structure, the taxonomic classification of terrestrial gastropods, and history of terrestrial malacology in BC.

The book is part of the popular and long-running Royal British Columbia Museum Handbook series; begun in the 1940’s, handbooks cover a variety of natural history and ethnobotanical subjects. The author, Robert Forsyth, is an amateur malacologist and is a research associate with the Royal BC Museum. He has studied terrestrial molluscs of British Columbia since 1990 and currently lives in [Kamloops], BC.