Cepaea nemoralis in the Bulkley Valley

In recent years, Cepaea nemoralis, the introduced European Grovesnail, has been turning up more and more.

This past summer I was asked to identify two separate records of C. nemoralis from Quesnel, BC. The population there is apparently well-established. However, in the Bulkley Valley where I live in north-central BC, Cepaea nemoralis certainly isn’t common.

As far as I know, it’s been found at least on three occasions over three years. The first individual brought to my attention was a large adult found on a road in a rural part of Smithers in October 2008. A little later that fall, in my own vegetable garden, I found an immature snail. Its presence there was almost certainly due to the movement of plants north from by dad’s garden, then in Surrey. In the two years since then, Cepaea nemoralis hasn’t been seen again in my garden so I can presume that this unintentional transplant failed.

The third observation on Cepaea in the Valley was in September 2010, in the village of Telkwa about 15 km “east” of Smithers on Highway 16. I was cycling uphill, leaving Telkwa, when I glimpsed — very fleetingly — what looked to be a “large” snail. (Large is a relative term here . . . almost all snails in the Bulkley Valley are < 6 mm). What I had spotted, and almost missed, turned out to be the apical part of a Cepaea nemoralis shell. A quick look along the roadside didn’t turn up additional shells, and a better search is surely worthwhile. 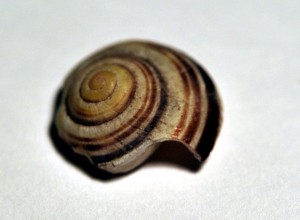 So I’m uncertain whether Cepaea nemoralis is established in the Bulkley Valley. At the moment, the evidence is (literally) fragmentary.